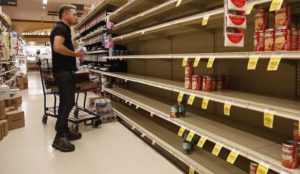 My last in PJ Media:

White House Press Secretary Jen Psaki said Tuesday which has been clear for quite some time: “The president wants to make fundamental change in our economy, and he thinks coming out of the pandemic is just the time to do that.” CNN is already laying the groundwork for this, preparing Americans for one of the most important features of socialist regimes around the world: empty supermarket shelves. On Sunday, the left-wing propaganda body disguised as a news source a long article titled “Supermarket Shelves Are Not Going Normal This Year.” Or, by the looks of it, after that, unless the leftists in the US government are removed from office in 2022 and 2024 and resolutely rejected.

CNN was candid about disappointing Americans who are still optimistic that this will all end one day: “If you hoped supermarkets would look like the Before Times this fall and winter, with unlimited options stretching out for you in… the snack, aisles for drinks, sweets and frozen foods, prepare for some disappointing news.”

The Before Times – is that before the pandemic, or before socialist democrats? came to dominate their party and the government? Either way, it’s the same, and it means fewer groceries will be available: “Many of the nation’s largest food producers tell grocers that they will have limited quantities of some of their products, including items like Rice Krispies Treats, Sour Patch Kids, some flavors of ice cream from Ben & Jerry’s [hey, not all the news is bad], McCormick gourmet condiments and Marie Callender’s pot pies due to labor, goods and transportation restrictions that constrain supply chains, according to emails viewed by CNN and interviews with grocers.

All of this means that “stores don’t have everything for all shoppers heading into the holiday season, and shoppers may not be able to find some of their favorite products, flavors or niche items.” In addition, “suppliers are warning the company of ‘potential shortages’ of food, glass jars and packaging containers.” As a result, “some food brands impose allocations or purchasing caps for certain products on supermarkets and distributors, while other suppliers more generally warn of limited availability. Suppliers usually put products on assignment when there are shortages.” One is Kellogg, who “told at least four grocery distributors in an email last month that Pringles Snacks Stacks, Eggo Pancakes and MorningStar Farms vegetable hot dogs and bacon will be allocated and Rice Krispies Treats snacks “will remain below service expectations” until the end of the year. The company also requested that stores cancel their promotions on Rice Krispies and Corn Pops cereals “to allow for recovery.”

No corn on the cob? Sorry, Joe!

There is more. Read the rest here.